Sometimes I take for granted dishes that for me are simple so I don’t consider necessary to make a recipe, but my sister asked for a specific recipe for cauliflower because she would have no idea how to combine ingredients to make it tasty. So for her, I put together this lectin-free cauliflower gratin recipe and I hope some of you will also find it useful, and tasty.

Firstly, this is one of my favorite ways to have cauliflower. It tastes really good and it’s quite festive, even though for us following a low carb lifestyle cauliflower has become an everyday staple and a replacement for everything. Secondly, is super simple to make even though the caramelized leeks require some presence and attention in the kitchen, it’s totally worth it, it elevates the dish by creating an umami layer.

Just to be clear this is not your usual gratin dish, which is made with flour, milk and cheese, and sometimes breadcrumbs, but it’s pretty close, that’s why I call it a gratin. I used heavy cream, Gruyere and Parmesan cheese (not much of either if you worry about the amount of saturated fat or dairy), and ground pecans.  Alternatively, you can make this dish dairy-free, by using coconut milk and nutritional yeast. This is how the dish looks before adding the caramelized leeks.

Since there is no flour in the sauce, it will not get thick, but if you want that you can mix in about 2 tsp arrowroot powder, mixed with cold water first. The caramelized leeks will be added at the end, so you can make them while the cauliflower is in the oven. Making them is easy, but you have to be there and watch them and stir often. These are some pictures of the process to help you visualize.

Preheat your oven to 375F. Boil the cauliflower first, for about 5-7 minutes (if you florets are smaller maybe less, you still want the cauliflower to be firm). Drain the cauliflower and add it to a baking dish (a 9×9 inch or something similar in volume is perfect). Mix the heavy cream with Gruyere cheese and nutmeg, the pecans, some salt and pepper to taste. Add the sauce on top of the cauliflower and sprinkle some grated parmesan cheese on top (I added a handful, you can go crazy here if you want and don’t care for keeping the dairy moderate). Cake for 25-30 minutes, or until the cauliflower gets a golden brown color. While the cauliflower is in the oven, prepare the caramelized leeks. Finely slice the half sections (use the white part and a little bit of the light green, but not the leaves). Add a little bit of avocado oil to a sauteeing pan (I used a large one, so most of the leeks have contact with the pan) and heat on low to medium heat. Add the leeks and stir every time they get a little stuck to the pan. When you start to get brown spots on the pan, start adding just a tiny amount of water (about 1 tsp) and continue to stir and watch them (continue this until they are caramelized). They take about 25 minutes to be ready, but it’s worth it, they are so tasty. At the end add a sprinkle of balsamic vinegar (used an aged, slightly thick one), stir some more and take off the heat. Add the caramelized leeks on top off of your cauliflower and bake for 5 more minutes. 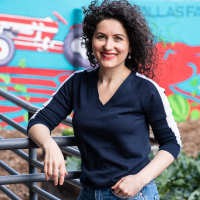 Funny story: I used to be terrified to make ceviche at home. I would always order it out at restaurants and loved having it at friend’s houses, but making it on own?? That was a no-go! That was until I had a homemade version and saw that it really ...

Since diabetes, whether its gestational, Type I or Type II, involves lowering carb intake and increasing healthy lean protein and healthy fats, this meal does it all! One serving of this chicken dish equals less than 15g of carbohydrate (most of i...

I love chicken wings. Who doesn't? Chiles are a no-go for me, so I opt for the heat of ginger and a little lime. If I'm headed for a picnic or potluck, these are my default, along with a big chopped salad. I also often make these at home for movie ni...

If you’re looking for an easy, plant based dinner this recipe is for you! We’re slowly starting to add more plant based recipes into our dinner rotation over here. I’m much better at adding plant based breakfasts or lunches into our weekly meal...

So many of you have been requesting easy meal prep ideas! If you know me, you know how much this excites me since I’m all about the convenient and the healthy. Being able to prep a whole meal using just simple, clean ingredients that can power me t...

A delicious and fun plant based recipe that you can make for dinner, as an appetizer, or even a healthy snack! We’re trying to do more meatless dinners over here but it can get boring if you rely on the same recipe as your go to. I definitely fall ...