When Conventional Medicine Didn’t Help my Lyme Disease, I turned to Diet and Mindfulness to Heal The whole mess began completely out of the blue in May 2010, when I was a bright-eyed 22-year-old ready to take on the magazine publishing world. It was a sharp, stinging sensation in my left ankle after a day of exploring the city, and I chalked up the pain to a combo of unsupportive flats, concrete, and ambitious sightseeing plans.

Spoiler: It was Lyme disease, but I wouldn’t get a diagnosis for another two and a half years. Probably because there was nothing typically Lyme-y about my situation: I had no memory of a tick bite followed by flu-like symptoms and joint pain (the “classic” symptoms), and certainly no bull’s-eye rash. So instead of swift treatment, I fell down the rabbit hole.

About a week after my initial symptoms, and after my first MRI of many, I was told that I had tendonitis, which physical therapy should resolve. But then my other ankle started to hurt, and, after a few months, the pain extended to my knees, the bottoms of my feet, and even my arms. Sometimes when I stood up, it felt like electric currents were running through my toes.

The tendonitis diagnosis seemed shaky to me, so I got about five “second opinions.” Doctors ordered all kinds of tests— I even got tested for Lyme– but everything came back clean. So they kept prescribing physical therapy and strong anti-inflammatory drugs—and I kept getting worse.

After about a year, the pain became all-consuming. It was impossible to even stand for more than a few minutes—longer than that and the tendons in my ankles felt like frayed rubber bands ready to snap at any moment. Typing sent shooting pains up my arms. And all the inactivity created its own set of problems—my calves, once muscular from running, withered away to twigs, sapping my strength further.

I was so preoccupied with doctors visits that I gave no thought to my diet. Even before my downward spiral, I could stress eat with the best of ‘em—so adding on a layer of intense pain, anxiety about losing my job, and fear that I was missing out on basically everything didn’t do my eating habits any favors. I ate sugary cereal, peanut butter by the spoonful, pizza, and lots of froyo because, quite simply, it made me feel better. Of course, I then gained weight, got depressed, and my pain just kept getting worse.

At my lowest point, I was in a wheelchair and had to quit my job and move back in with my parents. As upsetting as this was, by removing an intense amount of stress from my life, for the first time in over a year, I was able to really make healing my number one priority. First step, I decided, would be to change my diet and my mindset. Sure, I could hardly walk, but I could change what I put in my mouth and how I viewed my situation.

That’s when I decided to try the Paleo diet. When I read up on it, it just made sense. The idea of drastically cleaning up and simplifying my diet to include only nutrient-rich, anti-inflammatory whole foods that would hopefully counter some of the intense pain I was feeling and prime me for healing—or at the very least, could help me drop a few pounds. So I did it for a month and then kept going. I also started going to weekly mindfulness meditation classes. One unexpected benefit of having nothing left to lose is that you’re open to the possibility of finding relief in practices you once thought were totally wacky.

While my pain only diminished slightly, I started cooking more, lost some weight, and felt a profound mental shift—I was actually feeling pretty damn chipper, which I can only attribute to ditching all those blood sugar spiking refined carbs that once wreaked havoc on my energy, and letting go of my attachment to the glamorous NYC life I thought I should be living.

Then, after a few months of trying to DIY my cure, the universe threw me a bone—I started seeing a new physical therapist, who was the first person to bring up the possibility of Lyme. At first I dismissed the notion, telling her I’d already been tested, but she went on to explain how standard Lyme tests are highly insensitive, missing nearly half of those who have the disease. So, she recommended seeing a Lyme specialist to get to the bottom of it.

I was so pumped at the idea of a diagnosis that I immersed myself in Lyme research. What surprised me was how widespread it’s become. And recently the CDC estimated that 300,000 people are newly infected with Lyme every year, about 10 times the previous estimates. Given the fact that I’d grown up in, and continued to visit, rural New England, it was certainly possible I had Lyme. So I made an appointment.

In a refreshing deviation from previous doctor-patient experiences, this Lyme specialist spent nearly three hours with me, listening to my every ache, pain, and symptom. Signs definitely pointed to Lyme, and he was confident I had the disease. Lyme can lie dormant for years until it rears its ugly head, he told me, which is probably why I couldn’t remember a tick bite since I was a teenager. It can also be exacerbated by a crappy diet high in refined carbs and sugars, which is probably why I felt my worst when I was pounding PB&Js like it was my job. His recommendation: keep up my current clean diet and take oral antibiotics (while supplementing with lots of probiotics to keep my gut in check) until I felt better. Since I had nothing to lose, I went for it.

Today, three years later—and a year since ending my treatment—I’m 98% back to normal. I still eat mostly Paleo and infuse mindfulness into my daily life, but now, instead of considering a walk to the kitchen a major physical feat, I am able to take my dog on five-mile hikes, pain free.

My battle with Lyme disease truly prompted me to slow down and tune into my diet, triggers and emotions. That’s when I began to understand that food, when chosen and eaten the right way, was my fuel and medicine. Adopting a healthy, happy relationship with food was one of the most effective healing strategies I could have chosen!

Even though it was a hellish roller coaster of an experience, I wouldn’t trade it. Through my journey, I re-learned what it means to eat healthfully by experimenting with my diet and seeing and feeling the positive results in my body. I also got in touch with my emotions and learned how to better manage stress thanks to meditation.  And I got a crash course in navigating the healthcare system—learning that, when it comes to your health, you have to be your own advocate and detective sometimes, even if that means rejecting conventional medical wisdom.

Learn more about the causes and symptoms of Lyme disease and find out the best treatments on Solving the Mystery of Lyme and Chronic Disease.

Transform your health with Further Food Premium Marine Collagen. Collagen heals your body from the inside out. Learn more here!

From One Serial Dieter To Another: How I Ended The Cycle and Lost The Weight For Good

Could Your Depression or Anxiety Actually be a Sign of Another Health Issue? Stephanie Eckelkamp Health Expert
Steph Eckelkamp Nutrition Coaching
Stephanie Eckelkamp is a Certified Holistic Health Coach who places a strong emphasis on low sugar and paleo style diets, as well as infusing mindfulness into all aspects of daily life...especially eating! She's also a nutrition editor and writer who has worked at several national consumer magazines and websites, and co-written the book Eat Clean Stay Lean (2015).  In her free time, she goes on super long walks with her dog Milo and hosts the podcast Teaching My Boyfriend How to Eat.
email
steph@stepheckelkamp.com

3 thoughts on “When Conventional Medicine Didn’t Help my Lyme Disease, I turned to Diet and Mindfulness to Heal” 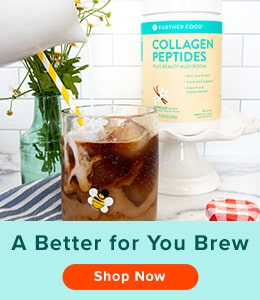